The year of 1943 saw the publication of Abraham Maslow’s theory of hierarchical needs. Maslow’s theory discussed that as individuals we have five levels of needs as shown in the diagram. 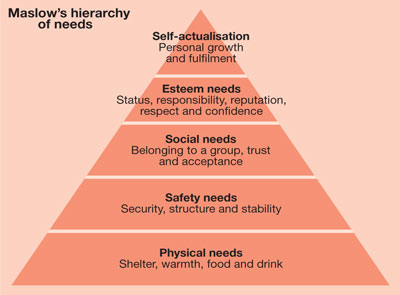 The first level includes basic needs including food, water, warmth and shelter and this relates to business as wages are needed to meet those needs.

Safety needs are those that involve protection from danger and an example of this when talking about a business environment include health and safety in the workplace as well as job security.

Social needs include the sense required by and individual of belonging and this can relate to being involved in work teams and activates.

Maslow identifies self-esteem needs as those associated with self-confidence, which involves feeling useful and wanting by colleagues in the workplace.

He then goes on to suggest that having satisfied all the lower needs, an individual would then be able discover their own potential for self-development – being the highest level in the hierarchy.
Along with his theory, Maslow believed that in order for an individual to move higher up in the hierarchy, the lower needs must first be satisfied. As a result, there is wide-spread criticism but nevertheless there is no doubt the theory has contributed to the understanding of staff motivation in the workplace. (Motivating and engaging employees for better business, 2015)

The equity theory involves the consideration of the worker’s perception of the fairness of work outcomes in proportion to their inputs. The outcome to input ratio is compared with the worker and another person called a referent. The referent is perceived similar to the worker.

Equity exists when a person perceives their outcome/input ratio to be equal to the referents ratio. If the referent receives more outcomes, they should also give more input to achieve equity. It is basically about equality of how much an employee puts in and gets back from an organisation. 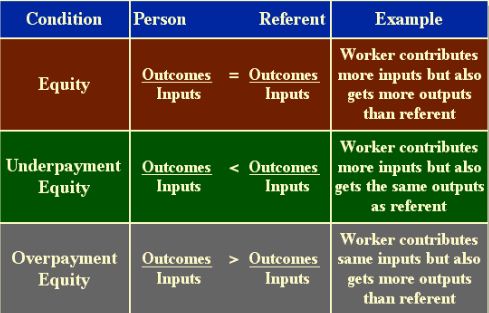 This particular theory focuses on the linkage between performance and outcomes. Learning is defined as the permanent change in person’s knowledge or behaviours resulting from practice or experience. Operant conditioning is a concept defined as the act of an individual learning to do things leading to desired outcomes and avoid doing things with adverse or opposing outcomes. Motivation can be increased by linking specific behaviours with specific outcomes when it comes to talking about operant conditioning. Managers can use a number of tools of conditioning to motivate high performance.

In both types of reinforcement, managers must be careful to link the right behaviours by workers to what the organisation needs.

·         Extinction: used when workers are performing behaviour detrimental to the firm
o    Manager does not reward the behaviour and over time, the worker will stop performing it.

·         Punishment: used when the manager does not control the reward the worker receives (perhaps it is outside the job)
o    Manager administers an undesired consequence to worker (verbal reprimands to pay cuts)
o    Punishment can lead to unexpected side-effects such as resentment, and should be used sparingly.